A plant-filled park with a gleaming thunderhead sculpture at its centre is the winning design for a new monument in Ottawa to honour victims of its LGBTQ2+ purge. The LGBTQ2+ National Monument is a partnership between the federal government and the LGBT Purge Fund, which was created from the settlement of a class-action lawsuit against the government. That lawsuit was born from the so-called gay purge, during which several thousand Canadians were investigated, sanctioned and sometimes fired between 1955 and 1996.

The executive director of the purge fund, Michelle Douglas, announced Wednesday that Team Wreford's design won the competition. The monument will feature a mirrored thunderhead cloud inside a large column, with a stage outside for performances and protests, and space inside the thunderhead for more intimate events. 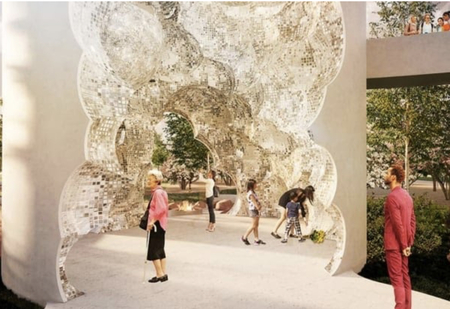 A view of the inside of the monument, which can host intimate events such as vigils. (Team Wreford)
"Our design embodies the strength, activism and hope of the LGBTQ2+ community, and is a lasting testimony to the courage and humanity of those who were harmed by the purge, homophobic and transphobic laws and norms, and Canada's colonial history," the design winners, Team Wreford, said in their pitch. "It rises up as our community has risen up to say, 'We demand change.'"

The area around the monument will feature an orchard, medicinal garden, a healing circle with stones chosen by two-spirit Indigenous elders and a path tracing LGBTQ2+ history in Canada, according to the proposal. The monument is scheduled to be completed in 2025.

Team Wreford pitched the thunderhead as a symbol of a community rising up to demand change. (Team Wreford/Government of Canada)
Team Wreford is tied to Winnipeg. Architects Public City Inc. are based there, as are visual artists Shawna Dempsey and Lorri Millan. Advisor Albert McLeod lives there and has family history in Manitoba's Nisichawayasihk Cree Nation and Norway House Métis community. 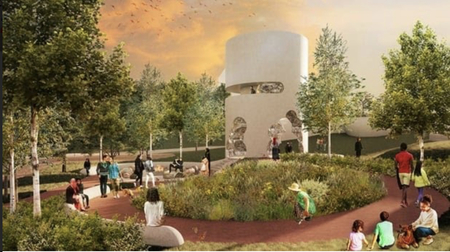 The monument will stand in a grassy area on the Ottawa end of the Portage Bridge, which connects Ontario and Quebec over the Ottawa River, just west of Parliament Hill. The winning design was chosen from a pool of five potential designs that had been released in November 2021 for public feedback. Besides the central thunderhead sculpture, the winning design has a path tracing LGBTQ2+ history and a healing circle made of stones chosen by two-spirit Indigenous elders. (Team Wreford/Government of Canada)